Graphogen Assembly Compound is a colloidal graphite paste in oil and gives protection and peace of mind when running in all types of precision built machinery.

Due to the high content of graphite in the compound, the paste is black in colour.  The very low co-efficient of friction far outweighs the appearance. 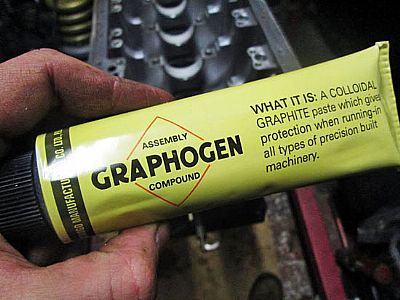 Graphogen provides an excellent safeguard against the potential rubbing or scuffing of metal components and is the first line in protection until the oil pressure is obtained.

What are the Benefits of Graphogen?

Graphogen is a paste and, as such, will not run off any parts it is applied to.

Graphogen, as well as containing the components of ordinary inhibitors, contains a strong concentration of colloidal graphite. It, therefore, forms a film on all treated engine parts, with improved lubricating, protecting and inhibiting properties. 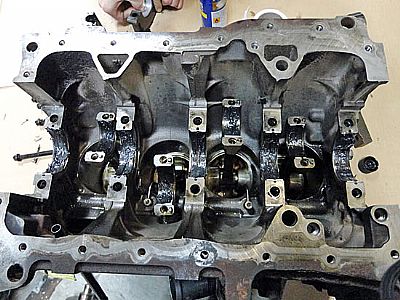 The treated engine can be stored for a long time and will have, on starting and from the very first revolution, the full protection of the colloidal graphite film against any deficiency in lubrication.  Without Graphogen and a lack of lubrication, there could be damage to the engine until full oil pressure is achieved.  Once the engine is up to temperature, the Graphogen simply dissolves in to the engine oil.

Where can it be used?

Graphogen can be used on all working surfaces of an engine during assembly, thereby giving the full benefit of the colloidal graphite to the engine parts right from the start. All internal surfaces of moving parts – especially cylinder walls, pistons, bearings, crankshafts, valve stems, camshafts etc can be coated with a liberal layer of Graphogen.

Graphogen has been used for many years, by the likes of Rolls Royce, Lotus, Perkins and Saab, and by many others in the trade.  So don't just take our word for it when it comes to how good Graphogen is for engine building.  Here are some testimonials.

Lotuselan.net  "I started reassembly today (the jack and crankshaft) and coated the surfaces with Graphogen paste after reading Mike Wilkens book.

This is quite an amazing paste which I believe was a product produced prior to the 2nd world war by technicians working on Junkers engines. The paste will disolve once the oil pump starts to take effect so protecting the vital parts at the all important start up phase.

When one applies it there is a good feel factor that the engine is well protected from the outset."

Landrovernet   "I've always used Graphogen when building up engines. It will stay in place of as long as you need and provides far superior protection to bearing surfaces when compared to oil based lubricants."

InternationalMR2OwnersClub  "On bearing surfaces, I've always used a graphite paste called 'Graphogen'. The reason I used this is because I never knew how long engines would sit around for before being run."  "I have used Graphogen for 15 years."

Matt Tomkins, Practical Classics Magazine - used during one of their recent engine rebuilds "It’s a fairly staple product favoured by engine builders and is ideal for classic engine rebuilds, particularly on camshafts to protect them against initial wear of first start-up before the engine gets oil pressure."